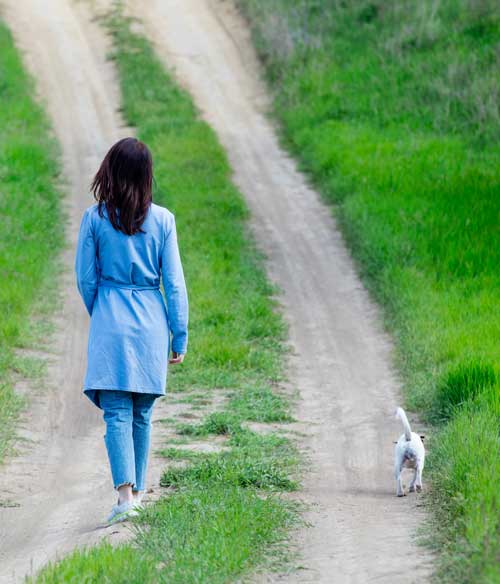 I didn’t recognize the woman walking her dog where I used to roam with Caesar and Bo. She wore a baby blue down jacket that looked new. The boxer with her had what appeared to be a new jacket too. It was only 45 degrees — warm for Central Oregon standards. Rupert our puppy didn’t even have a jacket because we had planned to be in California by now. I wondered if she could be the woman of the couple who had bought our home. They were from California and 45 degrees could be cold for them. We hadn’t met them, knew only that he was a retired contractor. All transactions had gone through real estate agents (we love ours) and title companies, impersonal, never knowing if they’d care for our home the way we had. It hadn’t been an easy decision to sell and downsize and we still weren’t certain whether we’d extend our wintering in Rancho Mirage to full time or look for a duplex to purchase in the spring back in Central Oregon.

Driving on for my rendezvous with our former neighbor Sarah, Rupert and I pulled in across from our old home. We were staying at a B&B for a few more days until after Jerry’s reception for his high school diploma. Rupert met Sarah’s two dogs then the three of us (minus Sarah’s charmers) headed off past the Wicked Chicken place (where I’d picked up eggs for the past 12 years). Around the bend we approached the woman in the blue jacket and her boxer. Sarah said “That’s who bought your house.” The woman greeted Sarah and reminded her of her own name, Vicki. Sarah said, “And this is Jane, the people whose house you —“

Before she could finish, Vicki’s eyes teared up and she put her hand to her heart. It was the gesture readers will use when they have truly loved a book I’ve written, as though to mark the heart as a profound gift of care in whatever brought on the touch. “Oh,” she said. “We love our home, your home, so much. Thank you for all you did.” And then she told us how she had not seen the house before her husband bought it — only photographs. That he loved Jerry’s shop and had already built the cabinets that Jerry had left plans and materials for. That he’d replaced the wood stove in the sunroom with a pellet stove (they called it the sun room, too! Hurrah!) and that their daughter and son-in-law were coming from Chicago for a month and would work out of the sunroom. I had envisioned that large room as a great virtual workspace once my nephew had sold the pool table, large sectional and treadmill and taken my grandmother’s table and chairs back to Minnesota. It was a huge room. Windows surrounded bringing the pond and desert landscape inside. The cacti had thrived there. 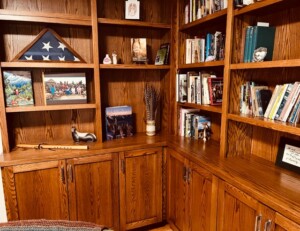 Their love for their home was palpable and gratifying, that little things we’d done were appreciated. The built-in bookcase that I loved they did too. The redone deck. We’d paid for a final landscaping visit after we’d left so they wouldn’t arrive to a lawn that needed tending. (And I wanted them to meet Ciro who knew more about the irrigation system than we did!) It was as though I’d always known her, a retired educator with a son and girlfriend joining them all for Thanksgiving. And it was a completion of a transaction but with a spirit. It wasn’t merely the buying of a house to flip. They wanted a home to share with family and we had so wanted people to buy it that wanted more than just a house. I took it as a gift of caring beyond our wildest dreams. And divine details, too. When we’d prayed about the decision to sell I’d found comfort in a phrase: “I will take care of things.” Meeting Vicki, I felt so cared for in so many ways.

“We’re having a little introductory gathering on Halloween. Why don’t you come?” Vicki said. “My husband would love to meet you.” Sarah encouraged it and so we will join them.

“I thought it might be you when I drove over this morning,” I said before we parted: Vicki to go home; Sarah, Rupert and me to finish our walk. “Your jacket looked new.” She told me it was new and so was the boxer’s jacket. He leaned against me then, the way Bo used to. And Vicki added, “His name is Bo.”

“They had a Bodacious Bo,” Sarah told her. Our wire-haired pointing griffon who once romped in the fenced back yard.

“It was meant to be,” Vicki said then reached out and we held each other, both saying “I’ll start crying” but with a joy that makes our leaving so much easier, so much a gift of caring from another family who has found a home.

The word “caring” has roots from “lament” and “grief.” We had grieved leaving our home and neighbors behind. But with our chance encounter I could let that go to look forward to our future and the making of a house a home in another place.

I love puns. A friend sent me a bunch. Here’s a favorite.
“I wondered why the baseball kept getting bigger. Then it hit me.” 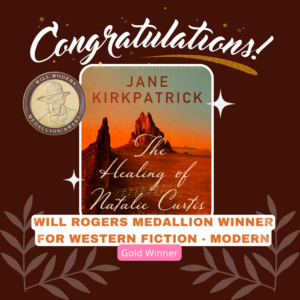 November is Native American Heritage month. That makes the following award even more special! The Healing of Natalie Curtis won the Gold Medallion for Western Fiction award from the Will Rogers Foundation. I’m so pleased as Will Rogers had a heart for Native peoples and claimed a Native heritage. So grateful that Natalie’s story has garnered so many fine awards. Tabitha Moffat Brown won my other gold medallion award. The foundation loves a strong compassionate woman’s story. If you’re looking for a good book, check out the Foundation winners in several categories. Good reads all, especially sister Oregonian Shanna Hatfield and Arizona buddy Pam Nowak. Pam was in Ft. Worth to pick up her award and to pick up Natalie’s too!

Beneath the Bending Skies Give Away

I have two large print copies of Beneath the Bending Skies to give away. Visit my Contact webpage and leave me a message. I’ll pick two winners at random. (North American readers only this time time.) The cover colors are the same as the original you’ll note, but a slightly different scene. That’s because large print publishers often buy the rights for the text but will create their own covers. Center Point Large Print did a great complimentary job!

Thank you all for attending events virtual or in person this past year. My next events are in 2023. They include the day before Mother’s Day at the Aurora Colony on May 13th; the Linn County Historical Society in Albany, OR on May 21st. And I’ve booked a presentation at Willamette University in Salem for next fall at the Institute for Continued Learning. More to come on these events. Many of my events are later posted on YouTube or at a bookstore’s website so even if you’re not local, you can view them. I’ll keep you posted on my website’s Events page and on my Facebook author page. 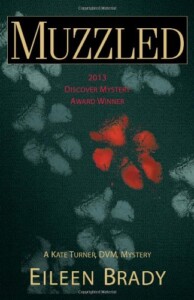 This was the perfect cozy mystery for someone who just acquired a Cavalier King Charles Spaniel. Even if you didn’t, it’s a delightful read. Veterinarian Kate Turner visits a breeder of Cavaliers in upstate New York and finds both husband and wife dead. Thus the story begins. I learned about a variety of breed behaviors including our Rupert’s (who just discovered snow!). It’s a fast-paced mystery, funny and informative with a little romance thrown in between the litter boxes and dog shows. There are even tips for getting your labradoodle’s white coat to not reflect the light in the show ring (baby powder). The book was given to me by a friend who has Caesar’s brother now 14 years old. Caesar didn’t make that birthday. But now we have dear Rupert and a great read. I’m looking forward to the next mystery in this series!

Jerry and our crew decided he would not go deer hunting after all. He just wasn’t feeling up to it. And the day after we made that decision, our super helper Ken tested positive for Covid. So it was meant to be. Jerry will receive his diploma the day before Veterans Day and the following week we will head to California. By waiting, Rupert experienced snow!

Plus, this minor delay has given me some time to chat with my new agent (my former agent retired and closed her business). I have a new project in mind. I will keep you posted.

Meanwhile, I hope you look for the small signs of caring in your world and let that presence bless you, the way we’ve been blessed by meeting the people who are making our old home theirs. What a joy! Thank you for making room in your life for Story Sparks! Have a grand Thanksgiving. See you in December!