One of the scenes in The Healing of Natalie Curtis that readers are talking about concerns Natalie and another white woman, a teacher, singing happy birthday to an Indian child not allowed to sing her own songs.  Minus the prohibition on singing, this scene came right out of my own life. Once a month when I worked with families of children who had disabilities on an Indian Reservation, the parents and kids and specialists like — physical and occupational therapists, nurses, and more — would gather for a snack and chat. On a particular day, it was also Sarah’s birthday (not her real name) and with her father’s consent, we’d planned a party. Six or seven little preschoolers sat around the table while parents beamed behind them. A cake appeared in front of shy Sarah and we began to sing.

Her eyes grew large, filled with tears; her lip quivered – and she slid under the table.

We adults looked at each other wondering what we could do to relieve her distress when all the other kids slid under the table and sat with her. 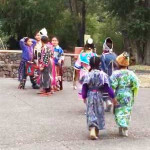 I gave that scene to Natalie with the insight those children gave me that day: when someone is distressed, the best thing we can do for them is not to try to fix it but to walk beside them, be their companion with compassion. The word compassion means with mercy. I felt that I was in a space of grace that day and so grateful for the mercy shown.

We served those little cherubs cake under the table. Sarah eventually came out from her refuge, beaming, along with the other kids wearing frosting-smeared smiles.

Oh, that in this era of quick-to-correct we might find that judgeless-compassion and carry it forward. I like to believe that Natalie did just that as she worked to break the 1883 Code of Indian Offenses that traumatized so many Native people. 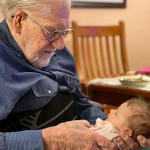 For those of you who have kept healing thoughts and prayers in your hearts for my husband, Jerry, thank you! His stage IV melanoma cancer for which he’s been treated with immunotherapy for two years has taken him to full remission. He celebrated with a visit by his great-granddaughter Ayvra Isabella. Caesar is pretty taken with that baby too! This is the fourth time Jerry has had a cancer diagnoses and has beaten them. His oncologist said Jerry was the healthiest patient he’d see that day. At 91, that’s pretty cool. Thank you God and thank you researchers and medical science – and all of you.

Something Worth Doing, the story of suffragist Abigail Scott Duniway, has earned a third-place nod in the Will Rogers Medallion award category of Maverick! Sweet! My chapter about Abigail in Steve Forrester’s book Eminent Oregonians, has also earned some great reviews including from Kerry Tymchuk, Executive Director, Oregon Historical Society:  “Three talented Oregon authors sharing the remarkable stories of three Oregon icons: If you love Oregon and History, it doesn’t get much better than that!”

You can also view the Oregon Historical Society zoom event with we three authors chatting about our subjects here.  Order your won copy of the book here. 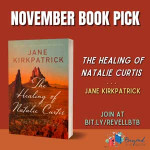 Please consider joining the Beyond the Book Facebook group. It’s a pleasant group discussing Revell/Baker published books. For November they selected my latest! I’ll be giving away large print copies during the month and hopefully entering the discussion with readers!

November 11, 6:30 Pacific, Zoom event at Paulina Springs Books.
I’ll be on Zoom through Paulina Springs Books of Sisters, Oregon, with Michael Zimmerman, author of the Wrangler Award-winning novel The Poacher’s Daughter. It also won the Spur award from Western Writers of America. It is a terrific read! Michael has captured a strong female character giving evidence to the capacity to write outside one’s own experience. We’ll also be talking about The Healing of Natalie Curtis. This independent bookstore will split donations from the sales of books that day between The Chúush Fund (water for Warm Springs people) and Papalaxsimisha, (a program supporting Native projects including libraries.) The bookstore will donate $5 for every copy of Natalie’s story sold in 2021 as well as 25% of daily sales on the 11th! Hoping for it to all total around $1000! So generous! If you haven’t yet bought The Healing of Natalie Curtis, check out www.Paulinaspringsbooks.com, register for the free event  and pick up The Poacher’s Daughter, too.

December 9 – 6:30 Pacific – Virtual Event – Asotin County Public Library in Clarkston, WA, is hosting “Music, Healing and Story” a presentation about The Healing of Natalie Curtis. And Books Too, of Clarkston, WA will have books for sale following this event. Join me!  Visit  https://asotincountylibrary.org/ for more information.

December 13, 6:30 Pacific – virtual History Pub sponsored by Lane County History Museum https://www.lchm.org/. No suds this night, but I’ll be paired with fellow author Steve Forrester (Greg Nokes did a solo event about his subject, Jesse Applegate). We’ll discuss our Eminent Oregonians subjects.  Mine is Abigail Scott Duniway (Something Worth Doing) and Steve’s subject is Richard Neuberger, one of Oregon’s senators who was both a prolific writer and passionate about the environment before it was a thing. Join us!

Brothers on Three: A True Story of Family, Resistance, and Hope on a Reservation in Montana
By Abe Streep
Caledon Books, NY, 2021

I know a little about football (Go Ducks and Packers) but very little about basketball. Still I was enthralled by this non-fiction book by a New York Times writer who followed the Arlee Warriors of a small high school in the Bitterroot Valley of Montana. My work in progress is set – in part –in that same valley but in the 1870s. I met the author at the Pacific Northwest Booksellers event in October where we both spoke about our titles. The Arlee basketball team won the state championship and brought the trophy and honor home to the Flathead Reservation in 2017. But that was just the beginning of this intriguing story about players, coaches, practice, passions and how a community rallied around a team and helped them cope not just with wins but with losses. “You’re never promised tomorrow” says Sophie Cullooyah Stasso Haynes at the beginning of Part One. A sober reminder of the importance of family, friends and in this story, faith, too. I know a little more about basketball from reading this book and about the author who authentically shares how he was changed by researching and writing this story. He’s won awards for deep research and writing about underserved populations. I also learned about the resilience of the Confederated Salish and Kootenai People and the landscape and people that help sustain them. A great Montana story.

Me: huh. I wonder what happened to it? Maybe it crawled back down the drain.

Jerry:  I killed it.

Me, confused: But you just said you didn’t?

Jerry: I killed it in the shower.

Me: Why did you say you didn’t? Me, thinking maybe I sounded accusatory and he didn’t want to acknowledge he’d killed it? It’s ok that it’s gone.

Me: So to get a yes answer to my information-gathering question I needed to say “Did you at any time in the last week, either inside or outside of the shower, kill the spider?”

Jerry, hovering over me at the stove:  Don’t you think you should add more salt to that stew?

Jerry, louder: Don’t you think you should add more salt?

Jerry: DON’T YOU THINK YOU SHOULD ADD MORE SALT?

Me: Oh, you’re asking the question not to get information. You want me to add more salt. 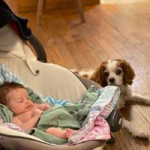 It has taken us 45 years to distinguish how the Kirkpatricks use questions: I tend to ask them to gather information. Jerry uses them for behavior change. So when he asks me a question I answer it like he actually wants information and when I ask him something he assumes I am trying to get him to do something or perhaps about to accuse him of something he’s done – like killing a spider in the shower.  Dear Abby, can this marriage be saved before we drive 900 plus miles from Bend to Southern California?

Meanwhile, we’ll be hoping that in this season of gratitude, compassion finds you like the mercy of small children taking refuge under a table, together, smacking cake and bringing comfort.

Have a happy Thanksgiving,