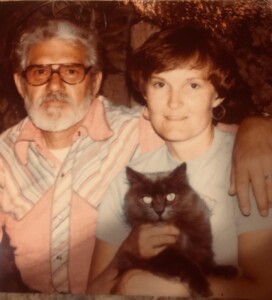 The picture of Jerry and me and John the cat was taken in 1977. I know exactly because of the shirt Jerry’s wearing and the major mis-communication that occurred that October. He had gone hunting six hours north; I had planned a long weekend with friends in Ashland, Oregon four hours south. We kept in touch via a walkie-talkie when each evening his hunting partner would climb a ridge above their camp and call out to his wife, both standing many miles apart, wind often distorting their words. Then Sharon would call me with their status. The message that arrived to me on Friday evening, the first day of my great escape, was that I was to “bring the truck and come now” 10 hours one way distant. I had bought that shirt for him that afternoon in Ashland, but wished at that moment that I hadn’t, gifting him for interrupting my getaway? I had to back to work on Monday which meant I’d be driving all weekend.

As a dutiful wife, I left, headed home where Jerry’s teenage son who had begun living with us that fall was holding a party! After breaking that up, and picking up the truck from the shop where it was being repaired, I drove several more hours to meet up with my husband. Imagine my surprise when having come out of their camp to pick something up, the first thing he said to me was “What are you doing here?”

“I’m bringing you the truck you asked for.”

“I didn’t ask for the truck. I just told Dave to tell Sharon that if you wanted to come up next weekend, to bring the truck and not the car because it’s so muddy.”

I could hardly be angry with this game of telephone gone awry. But oh, how I wished our communication had been clearer!

Abigail Scott Duniway, the subject of Something Worth Doing had similar angst when she was invited to tour and speak about women’s suffrage in 1871 and earn $800 in the process. She dutifully telegrammed her husband Ben to seek his permission. He replied with “Come home immediately.” She worried all the way back on the steamship from San Francisco that something was wrong with her six children or him. But she arrived and everything was fine. He hadn’t wanted her to be gone any longer than she had been. I suspect she fumed in that bit of communication strain.

Communication issues have plagued many of us during this pandemic and election season. People in assisted living arrangements have kept family apart during the quarantine. Those displaced by fires and floods and other natural disasters also find themselves forced to advance their needs with strangers who hold power in their lives – to get housing, food, insurance payments, access to their burned-out homes. Kids attending classes virtually and the parental strain. And we all know the stories of those hospitalized with Covid-19 who had to say good-bye through the help of a nurse holding a phone rather than being able to hold the person themselves.

I’ve had a few miscommunication failures myself this season. What I keep going back to is a course I took 40 years ago about communication that talked about practices that work best in both calm and stormy conditions. It’s in my best interest, the instructor noted, to believe that one, people are doing the best they can; two, they aren’t out to get me; three, they’re generally cooperative and helpful. And over the years, I’ve added a fourth: that if parties to the communication can agree on the outcome, there are numerous paths toward it. It’s true, some people are out to get us – but it’s rare. And people can have bad days, weeks even, when they don’t seem cooperative or helpful. But it’s still in my best interest to believe they are. That way I can keep calm in a stormy place. When I haven’t followed these simple rules, the communication tends to falter.

The preface com in words like community, communion and communicate once meant the exchange of burdens. That’s what effective communities do. They find ways to help those separated due to pandemics, fires and floods. We exchange burdens when we genuinely commune with people even when we disagree but can respect each other’s’ positions. And we exchange burdens when we respectfully share our desires and even our frustrations in our efforts to carry on.

Abigail must have had numerous times when she questioned whether people were doing the best they could. When her brother refused to print one of her essays in The Oregonian newspaper that he edited, she probably had words to express her frustration. But it didn’t stop her from pursuing her goals. She started her own newspaper she ran for 17 years, unheard of in the 1870s and printed her essays there. She inspires me to find new ways to communicate, to remember that especially in these challenging times, people are doing the best they can, they aren’t out to get me and they are generally cooperative and helpful. At least it is in my best interest to believe those things and it might be in yours as well as we walk this crooked road of pandemic living.

By the way, Jerry still has that shirt! He went hunting this October and got his deer! 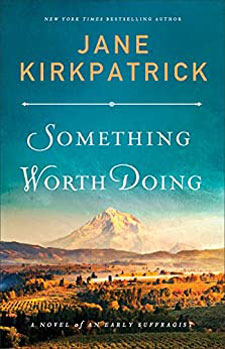 Something Worth Doing is out and about! I’ve been notified that there will soon be a large print edition which many of you look for! I’ve had some great Zoom interviews about this story, despite my desire to keep looking at the wrinkles in my neck. Visiting the Forest Grove Public Library You Tube page will bring you photographs of Abigail and a timely discussion about the right to vote.

Yesterday I spoke at the Oregon Federation of Women’s Clubs, of which Abigail was a member and served as President of the Portland area club. We social distanced (is that a verb?) and wore masks and celebrated the right to vote and women like Abigail who worked toward it. Not all Oregon women got to vote in 1912 nor did all women nationally after the ratification of the 19th amendment 100 years ago. Only white women did. The 1964 voting rights act brought suffrage to many of those women. Here’s hoping we’ll honor the sacrifice of women like Abigail and others who had to wait by exercising our right to vote. Oregon votes totally by mail and has for twenty years but if you have to stand in line, maybe take along a copy of Something Worth Doing to read or listen to 😊

I’ve had a number of authors not yet published but for whom writing is a passion in their lives contact me this past year. An author friend in Wisconsin tells me she’s writing a daily Covid Journal at the request of a local historical society so that 100 years from now, people will know what it was like for ordinary people. So it seemed a good time to remind any of you interested in writing your stories about writing opportunities in your own communities. There are statewide and regional writers’ groups to help support you. There are annual conferences that this year are being done virtually. I’m on a panel for Women Writing the West. It’s a new Zoom for me.

The Writing Ranch operated by friend Ellen Waterston will hold her in-person class “Writing Down the Baja” in Todos Santos, Mexico in February. Small, social distance protocols. Here’s a link to her workshop to learn more and register.

And while I’m at it, I have CDs of my own writing classes focused on novels, editing, writing your family story and even overcoming angst about getting started. You can find those at my website. This is a great time to write your stories down. “Stories are medicine” as Clarissa Estes wrote. Give yourself some great medicine.

One of my favorite props in story-telling is my coping saw, a carpenter’s tool whose blade is both strong and flexible and is also able to change directions quickly without a lot of friction. A story of how a band teacher in a small school brought a community together and found a way to give music to his students by designing an instrument that didn’t require breath, could be played 12 feet apart, was inexpensive and could be put together by amateurs, is a super story. The kids were invited to decorate their new instruments as well. I especially liked the band director’s comment that the first things the kids had to accept “is that they can’t blow their horns.” Would that we would all come to accept what is – in this new time. It’s an act of changing directions quickly. Enjoy the story here. I love that during a time of storm, this inventive man found a way to bring something new into the world of his students and community. His success is a model for us all. 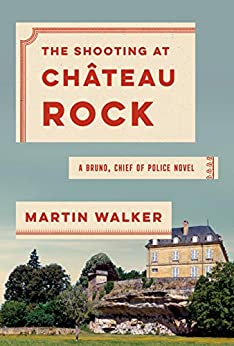 The Shooting at Cháteau Rock A Bruno, Chief of Police, Novel

I love this world traveling author’s books. He captures in his contemporary novels about a local police officer, the intricacies of living and yes, communicating well, within small communities no matter where they are in the world. Chief Bruno has a precious beagle, a long-distance love (who works in an EU branch of law enforcement) and he cherishes cooking and horses. I almost always learn something new about mushrooms and duck eggs but more, about human nature. These are delightful stories and this one brings us right into issues of family legacy and terrorism, an interesting mix. Walker’s plots are intricate crime-solving (and prevention) and pleasant gatherings of neighbors and their quirks. It makes for a read strong enough to take us from the anxieties of the present world and into fiction where everything has to make sense. Enjoy – and you don’t have to start at the first of the series. Just plunge in. 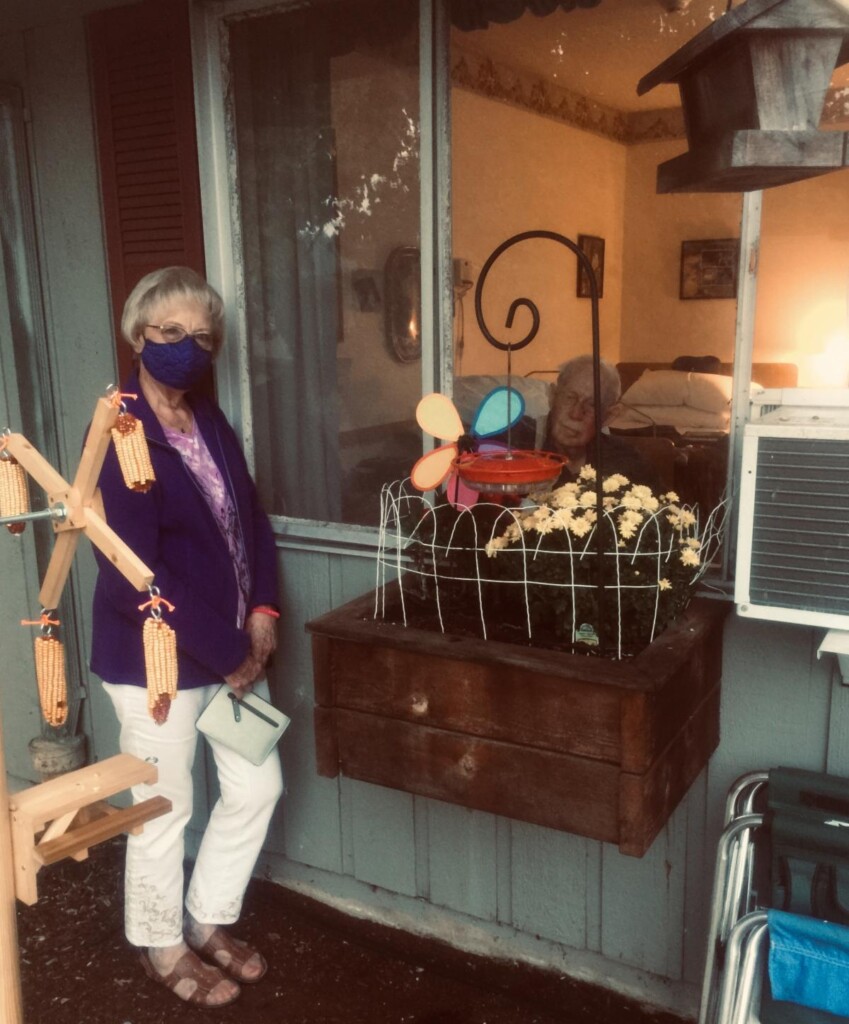 Creativity in communicating is a lesson to be learned in this pandemic. One of the ways my friend Carol—and her husband Jack Tedder— have coped with Covid-19 restrictions is to be creative for connecting with her husband of over 60 years who is in a skilled nursing facility. She has not been able to touch him since February – and we know the research about how touching helps us heal – she has to communicate with others who look after him now. They get to lift his legs to help him dress, hold his shoulders while assisting in transferring from his bed to his wheelchair. They serve him food, all things she used to do but can’t because she can’t enter the facility. It’s been a hard journey because at his age, 91, they know they don’t have a lot of time ahead together so “sharing” him with others can be a trial. But like those band kids, she knows she can’t “blow her horn” now. She must adapt. With her generous heart, she and her family have created a garden outside his window. A feeder attracts birds and recently a squirrel challenge was added to the “window patio” with corn to attract the fluffy-tailed rodents. When it’s warm outside, she can stand and chat through an open window; otherwise, she and her hubby use phones to share their days. But she has reminded herself that even in her 80s she is learning new things because of this pandemic. She’s being strong and flexible and giving herself credit for doing the best she can. Here’s hoping the same for all of us. Stay safe.