People often ask if I have a favorite title and I answer with “the one I’m working on now” which is true. But The Healing of Natalie Curtis, out September 7, is a close second. It’s a story of the power of music and intention in a healing journey.

It seems to me we are all on a healing trek of late, hoping the pandemic was under control then discovering it isn’t. Natalie’s story of the healing power of music has something for us, I think. At least it has something for me.

The poet Maya Angelou once wrote that as a child “Music was my refuge. I climbed inside the space between the notes and curled my back to loneliness.” She was in tune with musician Natalie Curtis, the subject of my book. Though Natalie wasn’t a child when she had a mental collapse before her New York Philharmonic debut in 1897, nevertheless she found healing in the space between the notes. In her instance, it was the notes of music performed by Indigenous people.

Her healing reflects what a century later psychologists at Baylor University discovered when they worked with children who had experienced trauma of various kinds: loss of home, death of a parent, abuse. What researchers found is that traditional counseling like I was trained to do as a Clinical Social Worker, was not as effective as movement (dance, quilting, woodworking); art (painting, photography); story — reading and writing them;  and music. These sensory experiences by-pass the critical side in our brains and go directly to our souls. They enter the amygdala oblongata, the part of the brain associated with emotion that does not shut down when the rest of a body might go into survival mode, which is where trauma sends us. 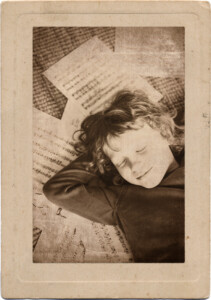 I have some personal experience with such healing. When I was a child, I had a terrible trauma which my parents never knew about. I didn’t understand it either until I was much older. It manifested in sleeplessness, obsessive behaviors, nightmares, anxiety. Rituals ruled me at bedtime. I had to speak two versions of memorized prayers and If I messed up, I had to start over.  I worried – about my mom when she had evening nursing duty and my dad, working in the fields on our Wisconsin farm.  I didn’t know why. Neither did my parents.

My father was a dairy farmer and my mother a nurse. Somehow they decided to place a record player in my bedroom. The LP they put on that played every night was the The New World Symphony by Antonin Dvořák. It debuted during Natalie’s time in 1893 in Carnegie Hall. She might even have been there to hear it. It was just a song to me on my record player that I went to sleep by each night.

The thing is, I began to sleep. The need to repeat prayers, worries and nightmares lessened. Each morning I felt joyful as though the New World Symphony had brought me a new world too. I never made the association between the music and my trauma until I was in professional training and learned about the uniqueness of how music enters the brain and lifts the spirit, how it heals.

Natalie Curtis took a risk. Against her parent’s wishes but at her brother’s invitation, she headed west, something young women of her class rarely did in 1903. Into this new world, Natalie found herself deeply moved by a Yuman Indian song she heard while visiting that Arizona town. While I worked for the Confederated Tribes of Warm Springs in Oregon, I’d be invited to “Medicine Sings” where drummers and singers played music to help heal whomever was in the room. You didn’t have to say where it hurt. The music went on for hours. I could never get enough. Natalie couldn’t either.

Natalie’s story deepens when she learns that singing Indian lullabies or corn-growing songs – Indigenous music of any kind — was in violation of an 1883 government law, the Code of Offenses. Natalie sets about to preserve the songs before they’re lost by seeking permission from the President of the United States to record them. Is she successful? How did her efforts change her? That’s the rest of the story.

We are in the “lawyers lookin’ over Film Option Document” stage. I’ll keep you posted!

For those who loved A Light in the Wilderness and the story of one of the first African American women to come west, you’ll be pleased to know that it looks like an elementary school in Oregon is going to be named for Letitia Carson. I Am SO HAPPY! When it’s all final and the ribbon cutting is scheduled, you all will be the first to know. Likely sometime next spring. Another first for this remarkable woman.

Below are my scheduled events for September keeping flexible as some are now in-person but they may morph to virtual in this new world. All are noted in Pacific time.

September 4 – 5:00 pm: Sunriver Books, Sunriver Village Building 25C , Sunriver, OR 97707.  During this live in-person event, Jane will speak about her latest historical fiction The Healing of Natalie Curtis, a story of a musician, Native American music and healing.  This is a ticketed event limited to 25 and requires a purchase of Jane’s latest novel The Healing of Natalie Curtis. https://www.sunriverbooks.com/ for more information.

September 9 – 6:00 pm: Roundabout Books, 900 NW Mt. Washington Drive, Suite 110 Bend, OR 97703. This is a live and virtual event at Bend’s Northwest Crossing Bookstore, Roundabout Books. Sit in cozy chairs, enjoy coffee and a scone and listen to Jane talk about stories and her latest novel set in the Southwest, The Healing of Natalie Curtis. RSVP required. In-store guests limited to 25. Register for in-store or Zoom viewing here.

September 19, 1:00 pm: Fort Clatsop National Memorial, 92343 Fort Clatsop Road, Astoria, OR. It will be an outside event at the Netul Landing area of the Memorial. A presentation for In Her Footsteps, a celebration of “Wonderfully Unruly Women.”  Jane will talk about Oregon’s suffragist Abigail Scott Duniway in Something Worth Doing and Natalie Curtis in The Healing of Natalie Curtis. Jane’s books will be available for sale. 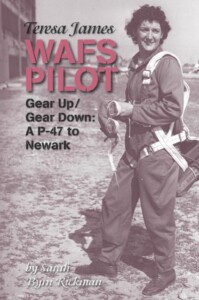 Teresa James WAFS Pilot: Gear Up/Gear Down – a P-47 to Newark
by Sarah Rickman.
Published by Flight to Destiny Press.

This is Sarah’s 11th book about female flyers and the fourth in a young adult biography that Sarah has written about women who flew in WWII. If you’re a WWII buff, you’ll love this. If you’re a pilot, you’ll love this. And if you like reading about wonderfully unruly women, this story will be the bees’ knees. It captured me because Teresa James started out being afraid of flying – I did too. And then she became one, worked her way up to stunt pilot and ultimately flew aircraft across the country for the war effort. I got past the being afraid part but stunt piloting? Never! Teresa was interviewed by Sarah when she was 86 and you get the flavor of the spirited female souls who were also part of the Great Generation. Sarah’s an award-winning author. This book will be out on October 20. A great gift for aspiring girls. I loved this book!

Thanks to each of you who reached out to encourage my thinking about whether to keep writing. It’s my intent to keep doing so. Several historical women have called my name and I’m in the process of figuring out which one is shouting the loudest, “choose me.” My prayer team’s prayers – and yours – fill me with gratitude. As Jerry said, what would I do if I wasn’t writing? Caesar would tire of too much attention, and I’d be grumpy just looking after him. Writing gives me energy. It’s the only thing I do where hours pass and I am surprised to find out I’m not on a wagon approaching the Third Mesa in Arizona but instead sitting on my 39 year old secretary chair in front of my computer looking out at the Central Oregon sunrise. Surely, that is a gift not meant to be put down. At least not yet. There’ll be another book next fall but for now, enjoy The Healing of Natalie Curtis and thank you for your incredible support of my stories.

I read recently that Neil Armstrong took a recording of “The New World Symphony” with him on Apollo 11 when he walked on the moon. Music was a companion into the new world he was to encounter.  I’m making a point of playing more music – not just classical, but blue grass, folk (think Chris Williamson), Queen, Pav 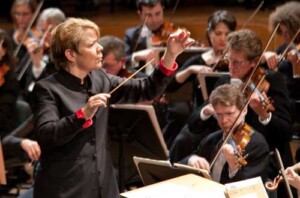 orati, Willy Nelson, gospel. When we take music with us – like Neil Armstrong did – we not only have a place to curl our backs to loneliness but also to put us on the path toward healing. What’s your favorite music? I hope you’ll let it take you to a new world. May music bring you peace.

Enjoy this wonderful YouTube video of Dvořák: The Symphony No. 9 “From the New World” conducted by Marin Alsop. This performance was from London in 2012 as she conducted the Sao Paulo Symphony Orchestra.