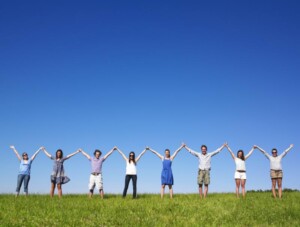 In making new patterns, I feel compelled to speak of my great sadness about the systemic racism in our nation especially as communities I love in Oregon, Minnesota and my home state of Wisconsin, suffer. And as Micah 6:8 asks, “What does the Lord require? To seek justice, act mercifully and walk humbly with our God.” My first seeking of justice was when I was 16 and part of a Methodist gathering that sat-in at the board of Education in Chicago, protesting school segregation. A few years later, it was marching in Milwaukee with Father Groppi, a priest and activist, protesting discrimination in housing. These were in the 1960s and the activists I followed were informed by their Christian faith. A few years ago, I marched with Black Lives Matter in Bend, (a walk sponsored by local churches) not because I don’t support the police – I have family who are police officers whom I pray for daily – but to stand with brown and black families who from the depths of tragic and violent histories, fear simply taking a run or wearing a hoodie. Most of all they fear being killed – or their children – by people in power whether once slave owners and sheriffs and now police, vigilantes or neighbors carrying guns. I would be peacefully marching now to show my solidarity against violence of all kinds and for racial justice, but for Covid-19 and Jerry’s compromised health. He would be unlikely to recover if he got the Corona virus.

A word about Black Lives Matter. It was begun in 2013 founded as a peaceful organization protesting incidents of police violence against black people and has morphed into an international organization with 16 or more loosely affiliated chapters working for justice for people of color. Some have described it as a Marxist organization or terrorist group and state that its members stoke violence at protests. If that’s so, those participants using violence are no different from other groups escalating conflict. But clearly, the followers – 67% whom espouse Judeo-Christian ideologies – are involved to support black lives. Our efforts have overtaken original leaders who would claim Marxist goals. Peacekeeping is the goal of Christians involved. Caring for those in danger is my purpose.. My denomination, Presbyterian Church USA (PCUSA) supports the goals of Black Lives Matter with words and actions we can take to make a difference. https://www.pcusa.org/weekofaction/

Everyone I know, myself included, is horrified by the destruction and looting of cities; and by the takeovers of peaceful protests by far right and far left groups: Proud Boys, Patriot Prayers, white supremacists or anti-fascist groups who stoke the violence. I am also horrified by what has preceded these destructive acts against property: the violence against people. George Floyd’s death, Breana Taylor’s death, the shooting of Jacob Blake and so many more victims. And the deaths of two protestors in Kenosha – and previously, at Charlottesville. And I grieve that our leaders fan the flames of racism and division rather than seek a national dialogue on violence of all kinds: against each other, by police, economic violence, gun violence but especially against people of color. I support the sport boycotts and strikes for as one player said, “Sports are a luxury allowed for a functioning society.” We aren’t functioning well. And maybe not having NBA, MLB, WBA, NFL to numb us from the pain of our brothers and sisters will be good for us, will wake us to seeking justice.

Where do I turn for guidance? Not to Facebook. I look to the scriptures and in Luke, where Jesus tells of the shepherd leaving 99 of his flock to focus on the one sheep who is in danger. Of course, the 99 matter, but they are safe for the moment; it’s the one who is in danger who must matter now. Please consider adding to your prayer list those in danger: people of color; our police officers who see the problems and hope to make changes and face a resistant force; our leaders, that they may promote a national dialogue on violence. For people of faith especially, ask how your faith community can support people of color in your town, letting them—and leaders trying to make changes – know that they are not alone. Pray for cities under siege that peace will prevail and find out what you can do to make that happen by contacting your city/county representatives. Call your elected officials. Urge changes in systems that discriminate and feed division and violence. Ask those running for office where they stand on racial justice. And remember what Micah asked: what does the Lord require? It was that each of us is “To seek justice, act mercifully, and walk humbly with our God.”

Thank you for listening.