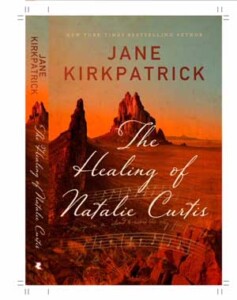 To begin in beauty once again, I present the cover of my September release, The Healing of Natalie Curtis. I love it! The story of Natalie Curtis is set mostly in the Southwest and this cover says that to me. It is a story of healing. Natalie was a classically trained musician who lost her song — and found it again through helping Indigenous peoples save theirs. It’s a story that reminds me of poet William Stafford’s words: “I have woven parachutes out of everything broken.” I’ll be sharing more in the months ahead about this remarkable woman and my own journey of discovery through sharing her story. For now, I hope you’ll enjoy just gazing! Before long, you’ll be able to pre-order. We’ll keep you posted!

This Story Sparks is about YOU. Not only you, the reader, but the pronoun You. I won’t go into its journey from thee and thou and ye to you, but here is a link to a brief grammarian history that is quite interesting. https://www.English-grammar-revolution.com/history-of-you.html. As a novelist, You is a point of view from which a story can be told. “You open the door, not sure what you’ll find,” for example. I’ve written from first person POV (I) and third person (She/He/They), but I’ve never tackled a book from You. Travis Trasher has, in a book titled Blinded. I found this book suspenseful and intriguing, but it took me awhile to get used to the “You” perspective. Some of the Goodreads reviewers did too though they stuck with it and like me, gave it 5 stars.

As a pronoun, you is pretty powerful. In an argument, YOU can raise the temperature pretty quickly saying “You never….” or “You always….” It’s an accusatory word at times. That’s why assertive communications encourage the use of “I” taking responsibility for one’s feelings.

I read an article that said the one word hit songs and bestselling book titles have in common is the word “you.” “I Will Always Love You” takes us to a time that evokes a “you” that speaks to our hearts. I’ll take that into account when I submit my list of 10 titles for the book I’m working on now.

But here’s how “you” can be another rung to the ladder leading us out of the cellar of sorrow that many of us find ourselves in, you and me. In times of trial, that self-talk can be pretty self-abusive. (Yes, I do that and I suspect you might too). “I am such an idiot.” Or “Why do I make such stupid decisions?” And “How will I ever get through this?” A recommendation of counselors is that we convert the I to You. “You are such an idiot” invokes a kinder response we would say to anyone else in our lives. “It’s easier to say “You aren’t an idiot. You are facing incredible challenges and mistakes will happen.” “You make terrible decisions” I can rebut with “You make some pretty great decisions, too.” My personal favorite (said this week after learning Jerry’s name was converted to Patrick Kirkpatrick instead of “Jerry” by the veterans administration). “I can’t stand another hassle!” (The rebuttal to that one is “If you can’t stand it, you’ll fall down. Since you’re still standing, you’ll make it.” ). But there is an element of hope in “you” that doesn’t always appear with “I.” So I’ve said to myself, “You can’t stand it.” and now I’ll say instead “You can’t stand this —but you will. You always do. You know how to ask for help. You will get through this.”

So during this Valentine’s month when love is celebrated, remember that you are important and be sure that as you love others, that you love you as well.

One More River to Cross earned the silver medallion in the Will Roger’s 2021 Competition. The book was in the inspirational

Western category.  We (Revell publisher and my agent) are delighted to learn of this fine award. We are doing the happy dog dance with Chica the dog that stole the story! Our thanks to the Will Rogers organization and the judges who announced their decision on the website www.willrogersmedallionaward.net  The other winners are listed and will make a great booklist for 2021!

In recognition of Black History Month, I want to remind you of Letitia Carson of A Light in the Wilderness. Once a slave, she endured great loss and rose above it. Her story is part of documentary produced by Oregon Public Broadcasting in connection with Oregon’s Black Pioneers Association. Oregon entered the union in 1859 as a slave-free state but it kept an exclusion clause in the constitution, a clause prohibiting free black people from coming into the state. That section wasn’t repealed until 1922. Despite that, Letitia went on to prove up property and became one of the first women — of any race — to own her own home. A novel written by Janet Meranda chronicles her life before her mother came to Kentucky. If you haven’t read it, you will enjoy the prequel titled Freedom’s Light: The Letitia Carson Story Begins. One thing Letitia’s life taught me was the importance of perspective as we face life’s challenges. She refused to be a victim or spend time on blame and accusation knowing that living there keeps one from one’s commitments. She was a wife and mother committed to taking care of her family and seeing the world in hopeful ways.

The Christian Ladies Book Club of Beaverton, Oregon, are a joyous group of women who love stories. One of the books they read was the story of Letitia Carson. This past month, their choice was One More River to Cross about the Irish travelers who were stranded in the Sierra Nevada.  This book club takes their discussion seriously with games, snacks and questions that led to a wonderful discussion about writing and life. Here’s a photo of this exceptional group.

Incidentally, in the local Palm Springs newspaper there was an account of a man who was stuck near Donner’s Pass for seven days. He had a camper with food and a heater and used two snowboards as snowshoes to walk out to a place with cell service. He was rescued while those Irish immigrants heading for California had to wait months for rescue. I always learn things from visiting with book clubs.  In a few weeks, I’ll be visiting one in Virginia.  Different book but I suspect members equally passionate about stories.  Besides a great discussion, LCBC have generous hearts. They sent me a gorgeous bouquet to grace our table. Wonderful winter perks. Visit my contact page to request my “presence” at your book club.

This is a book that one endorser described as “a hymn of love to the world.” I agree. The images this Citizen Potawatomi tribal member, mom, botanist, professor, daughter and granddaughter creates as she writes of pecans, maple syrup, Witch Hazel and more are fresh, wise and innovative. Her writing is as lyrical as the short legends she shares. It is a braiding of sweetgrass with science, stories with the humus of hope both for the generations to come and an honoring to those past. I read a chapter a day as a reward for my having done my work. You can read it straight through as a gift to give yourself.

Jerry’s latest CT scan showed that he is cancer free!! He is totally in remission. He must still infuse the immunotherapy and deal with the odious side-effects but he says he can live with those. He’ll have another scan in late April before we head back to Bend but for now we are singing God’s praises. He also got his first vaccine shot and the second is scheduled. Yippee!  Here he is on a scooter that a fellow VET gave him. Check out Caesar hovering behind him.

Most of all, YOU, we thank for your prayers, for holding us in your hearts, for continuing to struggle through a difficult time but being there for each other.

We thank YOU. Have a happy Valentine’s month. You deserve it!