I’ve put off writing this summer Sparks because I have sad news. I also have happy news (that I’ll get to later). I’ll delay both with a happy-ending story. 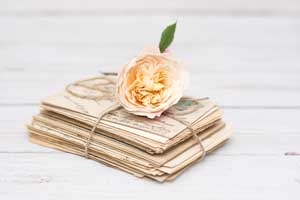 Some years ago, a friend attended an estate sale where she bought a letter written to a woman by a man who would become prominent in later Bend, OR. The letter was written in 1906 and something about it intrigued her so she went back and bought all 120 of the back-and-forth missives between young lovers. Then she gave them to me! “One day you’ll write a book about them!”

The letters have been sitting in a back corner of one of my shelves and because we are selling our home, I had to clean out the bookcase. I decided those letters needed to go somewhere else where — if I later decided to write a book — I’d know where they were. The local Deschutes Historical Society was delighted to get them. And when I delivered the faded letters, the historian told me the rest of the story. The society had a representative at that same estate sale as my friend. She asked the estate if they might consider donating the letters to the non-profit. They couldn’t as they were contracted to sell everything. So, the volunteer went away sans letters. But now they have them! And my friend got the “gift letter” because really, she was the one who gifted the tidbit of history making the happy ending. I love when things come together, don’t you?

Now the sad part: Our dear Cavalier King Charles Spaniel was scheduled to remove the “foreign object” in his belly that I mentioned in the last Sparks. His heart was checked. He could endure the procedure. But when they re-x-rayed to see where it was, it was gone! He’s passed it on his own! He’d dodged a bullet! We did the happy dog dance. But within a week, he stopped eating and for three days wouldn’t even eat venison, his favorite. I thought he might have a bad tooth. He had been sleeping more, turning down his chance for walks. I took him in to see the vet. She called later to tell me that his organs were shutting down – kidneys, liver, more. She noted that animals often hide their miseries so their people won’t be worried. But then they can no longer fake it. And so we said goodbye to our buddy with us for 13 years. The house is so empty. Our hearts are broken. We’ve thought about a puppy, but we just had the wood floors redone and we are selling the house, so maybe not. But then my brother said, “It’ll be someone’s else’s house so why not have puppy-pee in this house as you train him.” Hmmm. Better than crying to have a puppy around.

It’s Coming Soon!
Beneath the Bending Skies to be released September 1st! It’s the most romantic story I’ve written in a long time. This is not to scare off those who love the history and character development of my stories, but love rises above in this journey of Montana/Californian/Montanan Mary Sheehan Ronan. You can preorder at your favorite bookseller (and on my website here). If you order from other sources and let me know (by using this form), I will send you a signed bookplate. That way you can support sellers AND still have a signed copy! Thank you for your constant support.

Film Activity
Good news! We have signed an option for filming of Homestead! The company has four years to actually make the film but we are in the next step of the process where we hope one day the book will have a new banner saying “soon to be a major motion picture!”

I also had a surprise call from an entertainment industry professional recently. I’d known her from another time. She wants to pitch some of my novels for film. What a delight that would be to see Letitia’s story (A Light in the Wilderness) on the big screen or The Daughter’s Walk or even my short story “the Courting Quilt” as a Christmas special. I find it intriguing that there’s film interest coming in threes! Does that bode well?

A Great Honor
This week, The Healing of Natalie Curtis is being honored at the Western Writers of America conference in Great Falls, MT. A friend will attend the finalists luncheon to pick up my certificate as a finalist for Best Historical Novel. In October, that story will be in competition for the Will Rogers Medallion Award, events to be held in Ft. Worth,TX. The Memory Weaver won that award and last year, Something Worth Doing was a finalist. There are many fine finalists in the category of contemporary novel so we’ll see how Natalie’s story fares. It is humbling and gratifying.

July Events (Noted in PST time zone)
July 14, 2022. 6-8:00pm. Hermiston Public Library. 235 E. Gladys Ave, Hermiston, OR 97838. One Book, One Path. The community is reading The Healing of Natalie Curtis. What a joy to be involved in bringing people together through story. Please join me for an evening of insights and laughter. Bring your books and I’ll sign! An in-person event.

An in-person event celebrating story! View, visit & shop 18 award-winning artists paintings that were created from the reading of The Healing of Natalie Curtis. After each artist read the book, they choose one of their favorite meaningful events in the book and painted their interpretation. All paintings will be for sale.

The main event will consist of an artist reception, author presentation, walk & talk with Jane and a book signing. Music, food and beverages.

Come for an amazing evening of artistry across cultures and genres.

The Dictionary of Lost Words by Pip Williams
Random House Publishing Group, May 2022

While we had to be out of our house with the wood floors being redone, while Jerry was recovering from yet another hospitalization — pneumonia and UTI — and while Caesar was sleeping and not eating, I read this book. It is precious. Reese’s Book club wrote “Delightful…captivating and slyly subversive fictional paean to the real women whose work on the Oxford English Dictionary went largely unheralded.” It’s the Hidden Figures story of literature. There are a few four-letter words that are not “love” but they are discussed as ways of showing the hierarchy of words, which ones met the men’s criteria of “academic” language while perhaps ignoring the vernacular of common or slang or even kitchen words that women might use. It’s also an emotionally precious story of caring and putting a new meaning to the language of love. I cried more than once. Healing tears.

In Closing
Yes, we are selling our Bend home.

We have loved being here. Jerry enjoyed his shop which he hasn’t been able to use now for three years due to health. We love our neighborhood — the best neighbors ever! Seven miles from the airport and seven miles from the hospital. A beautiful yard and house and it’s all solar. But there are changes afoot with Jerry doing so much better in California desert heat and my need to be full time caregiver. Our plan is to move to California and spend several months back in Oregon during the summer at Air B & B’s unless we can find a condo (we can afford :) and perhaps rent it out six months a year. We will take wonderful memories with us and the ashes of both our furry friends. I still have stories in mind and as I can, will work to write them. But for now we will say goodbye…assuming our house sells! Do you want to live in Bend on 2.2 acres and write your novel looking out the window over blooming rhododendron? Contact our agent for details Caitlin Ducsik, Caitlind@windermere.com, visit at Caitlind.withwre.com, or 970-209-9055 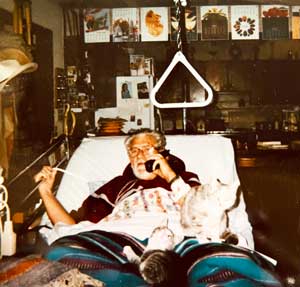 Here’s photo found among the clearing out I have to do. Jerry in a hospital bed at the ranch, on the phone, with two cats to keep him company. Memories…. May they nourish and transform.

Thank you for faithfully following my writing. Looking forward to seeing you in person at my upcoming events!