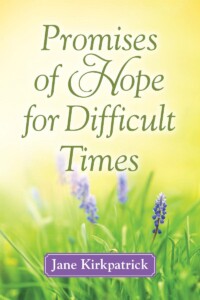 When I wrote Promises of Hope for Difficult Times, I was focused on the ups and downs of caregiving. First with my sister, then both my parents and throughout, with Jerry with his many bouts of cancer and compression fractures. Writing it was therapeutic – writing anything can be. I discovered insights I didn’t know I needed to learn. It is a frequent happening with my novels, too. I think the book is about X but it turns out in the end, it is also about Y. A Sweetness to the Soul was about a frontier couple and their relationship to their Indian neighbors – but it was also about my own coming to terms with childlessness. My latest, Something Worth Doing is about an early suffragist’s struggle to achieve voting rights for women in the late 1800s. But it turns out, it’s about sustaining hope in difficult times, too.

“Hope,” wrote Vaclav Havel in Disturbing the Peace “is an orientation of the spirit, an orientation of the heart. It’s the ability to begin something not just because it has a chance to succeed but because it’s a good thing to do. It’s not the certainty that all will turn out well, but the absolute conviction that something is worth doing regardless of how it turns out.” Havel went on to become the first president of the Czech Republic but he wrote those words during a difficult time when he was in jail.

People are likely to remember 2020 as a “difficult time.” The suffering has been endless. Businesses have closed. Families have grieved deaths, overcome disappointments and lived with desires delayed. Routines have been changed. Even our bodies have shifted. I’ve noticed that I’m the same weight I was when the year began but my clothes are fitting differently and a jelly belly has taken up space in my abdomen.

But despite the changes and losses, hope, too, has emerged in this difficult time. I think such hope is carried on the wings of personal extension, noticing needs around us and acting to assist. In my little Promises book, I quote a scripture, Acts 8:29 (NLT). “The Holy Spirit said to Philip, ‘Go over and walk along beside…’” That’s exactly what people have done to get through this difficult time.

Grandparents have stepped in as in days of old to provide child care (and instruction), some moving across the country to do so, finding new purpose in their lives. New businesses have begun because people banded together and shared the risk. People carried on their civic duties of helping during a hurricane (many hurricanes!) Essential workers continued to be there for their communities. And more people found their way to vote than ever before – volunteers and neighbors driving people to the polls, and in states that require a witness to a voter’s signature, a person walking their dog might be called upon to help a stranger, watching as they signed their ballot. And as I write this, Americans, not always known for our patience, are patiently waiting the results. (Our founders had to wait even longer until the results were hand carried across the prairies and ridden by horseback over the mountains to be certified.) We help each other in difficult times by reaching out, extending love, walking along beside.

There will still be hardships with this pandemic. But there will also be renewed opportunity to see how the challenges shape us. We will have to move – the scripture says “go over and walk…” But it promises that if we walk along beside another in a time of trial, we will have an earthly companion to accompany us. What could be more hopeful than that?

Stay hopeful. Keep caring. I’m vowing that during this difficult time, I will remind myself that it is also a season of gratitude and as with my novels, I may have begun thinking of them one way, but through the journey, I discover the deeper literary lessons. May you find similar insights in this difficult but also Thanksgiving time. 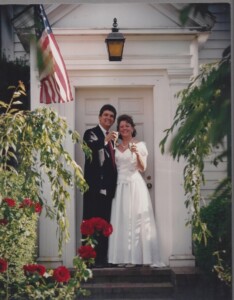 One of the delights of having a book released is hearing from readers. I received a great email from Oregon resident Kathy (and Mark) Gervaise. After reading about Abigail Scott Duniway in Something Worth Doing, she sent me her wedding picture because it was taken in front of the house connected to Abigail. Kathy and Mark Gervaise were married there! It was known then as the Kelty Estate Bed and Breakfast. It’s now a private rental. Abigail’s sister married a Kelty. So cool! Mark’s office as City Manager was across the street. Kathy has been involved in civic events just like Abigail and is a former president of Oregon’s American Association of University Women among other activities. Lafayette is the 3rd oldest city in Oregon, something I had not known.

Another woman, during a virtual gathering about Abigail, recalled walking in Duniway Park near Portland.

“I wondered what Mr. Duniway had done to deserve a park named for himself and then learned it was Mrs. Duniway who had earned the honor.” She confessed her bias, familiar to many of us, of assuming it was a man who would have been memorialized. Still another reader asked if there was a statue of Abigail somewhere. I knew of hotels, parks, schools and other public places named for her. “I don’t know,” I said. Turns out, there isn’t one. Saying “I don’t know” is a good thing. (The reader did the search and told me). But more, according to an article I read about emotional intelligence, being able to say “I don’t know” is an indicator of high emotional intelligence making me less averse to admitting ignorance!

It’s time for a change. Because of this difficult year, I’m simplifying my website and plan to do more managing of it myself. This means growing new brain cells on my part, working in a world with words like domain, SEO, and WordPress to name a few. And it also means becoming creative in a new way. During this time of transition, I ask for your patience. While all things Jane Kirkpatrick will still be found at jkbooks.com, there will be a time of transition over the next month or so. My website may be down for a short time. We hope that the change to a new platform goes smoothly, however there may be unforeseen tech glitches. Should you wish to connect and have difficulty, you can message me on Facebook  It’s a new adventure! Thanks for being a part of it! 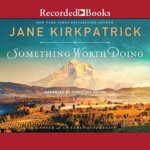 Good news for audio book lovers! Recorded Books has the contract for Something Worth Doing. They’re a great company for delivering quality recordings. I hope you’ll look for it so you can be entertained and informed while putting your gardens to bed for the winter.

Below are a number of interviews – radio, podcasts, virtual You Tube events – related to Something Worth Doing and other literary subjects that I have or will  participated in. You can listen to them at your leisure.

November 17-22, you can find a link to the interview at https://www.kneo.org/authors.html

Alison Treat interviews Jane: Today Alison released a special episode of “Historical Fiction: Unpacked.” She usually releases episodes on Thursday (and there will be another episode this Thursday), but her discussion with veteran author Jane Kirkpatrick needed to go live on Election Day. http://alisontreat.com/2020/11/03/early-suffrage-and-womens-rights-with-jane-kirkpatrick/

Coming up on November 17th at 6:30 pm is a Books in Common virtual visit with author Casandra Tate, author of Unsettled Ground and Jane featuring her book The Memory Weaver which is her novel about the same period in history following the Whitman tragedy of 1847. https://www.eventbrite.com/e/126741716887

Unsettled Ground: The Whitman Massacre and its Shifting Legacy in the American West
by Casandra Tate
Sasquatch Books 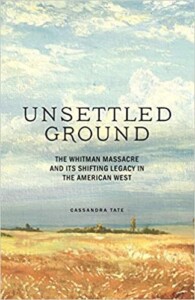 This is an exceptional book written by an historian from the University of Washington. It took me back to the research I did for The Memory Weaver, a story of Eliza Spalding Warren, one of the survivors of that terrible tragedy. It’s been known since 1847 as the Whitman Massacre when Indian people came to the compound and killed Narcissa and Marcus Whitman, Presbyterian missionaries who had come to save souls but instead built a compound that served travelers on what became known as The Oregon Trail. The clash of cultures is a stark reminder of the costs of colonization. Eleven others also died during a cold November day while many present were sick with measles including both Indians and non-Indians. It was their own pandemic that acerbated eleven years of unresolved issues between white people and the Indian’s whose land they took without agreed upon compensation. Tate’s fluid writing engages the reader and bring past and present into an understandable mix. She interviewed Cayuse people, descendants of a tribe that was almost wiped out who offered their side of the story. An excellent history of the settlement of the west. 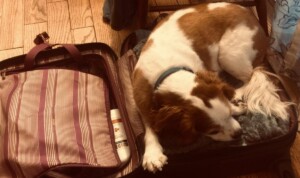 I know, you haven’t heard from me for quite a while. I’ve been diligently looking after my parents. They’ll tell you they’re looking after me (I had seven teeth removed). I was able to get them trained to soften my kibbles and start feeding me canned duck and venison shreds – until someone told them that dogs have 42 teeth so my not having seven wasn’t a big deal. Harumph! (But my mom is still giving me canned food over my kibbles. She’s a softy). We’re getting ready to head to California. I’ve been supervising the car packing going in and out of the garage to make sure my kibbles are there but also because I don’t want them driving off without me! I hope they let me sleep in the car the night before we leave so I can be certain I’ll be a part of the pack. My mom is driving. Dad is the navigator and it can be kind of hectic when they misunderstand each other. “It’s on the left?” “Right.” “Right? I thought you said left?” And on it goes…My dad is doing ok. He went deer hunting and got his deer. At 90, he felt pretty great about that. And his cancer is behaving – so long as he gets something they put into his arm every month. (He doesn’t need teeth for that though he has all of his!). We’ll miss the snow my mom says and arrive in Rancho Mirage in 80 degree weather. I can hardly wait to smell the new smells. But I’ll miss the scent of juniper and that of deer that passed through the labyrinth when no one was looking. But I’ll be safe with my family. I hope you’ll be safe too wherever you are.  Woof Woof, Caesar

Because of these troubling times, I’ve included a video (no sound) of pure joy. I especially like the chicken….. Thank you for your making room in your lives for my stories.